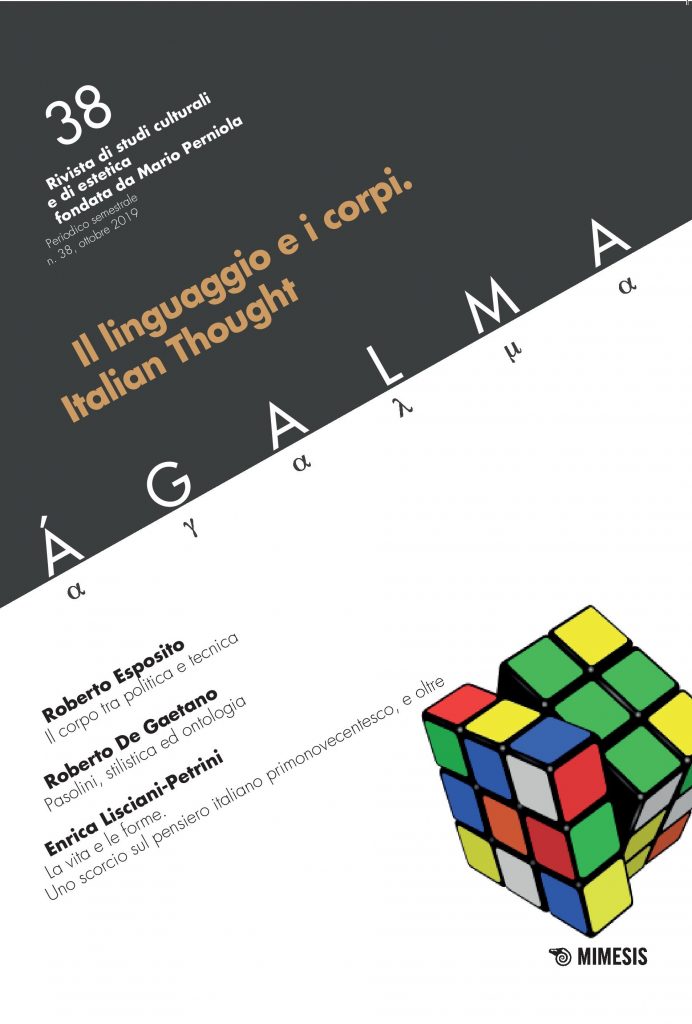 Body between Politics and Technique

The article analyses the transformations of the status of the human body at the crossroads between politics and technology. Always involved with the function of language, it manifests an extremely problematic condition. Located in an uncertain space between the person and the thing, at the beginning of the modern age the human body enters a direct and immediate relationship with politics. With the development of biotechnologies, it experiences a new dimension whose opportunities and risks are identified.

“Many have fallen by the edge of the sword, but not as many as have fallen because of the tongue”: “Sprezzatura” and Contempt in Italian (comic) thought

The essay crosses some concepts that remained for a long time in Italian literature between the sixteenth and nineteenth centuries: words as “motto”, “sprezzatura”, laugh, wit, dissimulation, contempt from Boccaccio, through Pontano, Castiglione, Accetto, Peregrini, Bartoli rise to Leopardi. Their meaning is as ethical as rhetorical and in their refinement and change they draw a profile of Italian thought.

Life and the forms. An overview of 20th century Italian thought, and beyond

The scientific discovery, achieved at the beginning of 19th century, of the problem of life meant as an organic and energetic dimension has produced a radical epistemological break, which has also reverberated through the field of philosophy. It has opened up a path leading to a ‘new ontology’, or, in other words, to a new vision of the world. This was a vision – set out by philosophers such as Nietzsche, Bergson and Simmel – that, through these very thinkers, had a far-reaching influence on Italian thought at the beginning of the 20th century, decisively shaping some of its representatives. By following its trajectory, which extends into the present day, this paper intends to delineate the fundamental features of this historic-theoretical framework.

Luigi Scaravelli: the nature of philosophy

We describe the frame of the post-war Italian philosophy, both to grasp the specific structure of the philosophical culture that developed in Italy in the last century, and, specifically, to understand the peculiarity of Luigi Scaravelli’s thought. In this perspective, the problem of historical judgement emerges, which makes it possible to place a fruitful correlation between Vico and Scaravelli. From the problem of History, then, we pass to examine the indispensable categories for the intelligibility of contingency and of the new in experience.

Within the most recent philosophical debates on the ontological status of being, political subjectivity and universality, the reflection of the Italian Thought on language has played and continues to play a very important role. Thanks to this, a delicate process has started aiming at redefining the articulation between biology and history, and therefore rethinking human nature. In order to discuss this theoretical operation, my paper will question whether language and humanity, seen on the threshold between animal and human being allow us to start an authentic emancipatory thought.

Language and nature in Italian Thought. The problem of the “semiotic threshold” between Umberto Eco and Giorgio Prodi

In The Living Thought Roberto Esposito presents, among others, two main conceptual characters of the “Italian Thought”: the “actuality of the originary” on one side, and the “historicization of the nonhistorical” on the other side. If human language is considered from this perspective, it will be nothing but a complex form of animal communication. On the contrary, the standard view of language in 20th century was that it is uniquely human. In this paper, the debate between the semiotician Eco and the scientist Prodi is analyzed through the basic concept of “semiotic threshold”. Eco used such a concept to trace a neat boundary between signification and semiotics on one side, and the simpler passage of information on the other side. On the contrary, the critique of such a “threshold” is the starting point of Prodi’s naturalistic theory of language.

Pier Paolo Pasolini by the expression “Free Indirect Subjective” [soggettiva libera indiretta] coined the notion that reads all the cinematographic modernity not as a generic phenomenological revelation of reality, not even as an emergency of a mere metatextual dimension, but as the emergence of style as an index of reflexivity that frees form from any mimetic task. Liberation, however, that never comes to exclude the “productive” dimension of the formative act, the one that sets it in the character as the author’s intercessor, and from which descends anyway a narrative trace, albeit episodic or enigmatic.

Starting from the Italian reception of Jacques Derrida’s thought, the contribution aims to show how some ideas of the Algerian philosopher have been rethought in the main volumes of Gianfranco Dalmasso, who has been the first Italian translator of Derrida. In the works of Gianfranco Dalmasso, the Platonic and Neoplatonic tradition, the contribution of Freud and Nietzsche, the work of Hegel, are reread in an original way in the light of notions such as “text”, “origin”, “rationality” that also represent some of Derrida’s critical joints.

The paper examines the most recent results obtained by research in the field of visual perception and neuroaesthetics. In particular, Zekian brain-based theory of beauty considers the function of art as a search for the “essential”, which constitutes an extension of the function of the “visual brain”. Zeki describes the existence of multiple “aesthetic senses”, each one connected to the activity of a particular visual processing system (microcoscience), characterized by a functional specialization called “node”. In its final part, the text will propose an epistemological overcoming of the Zekian modular and localistic approach by using non-linear models of biological self-organization.

Transit and the Cumulative Image: Perniola and Art

This essay argues that contemporary art is able to instantiate events that can transform ways of experiencing places and identities. This ability is brought about by a recalibration of theoretical approaches, and the learning of a new language of artistic apperception. It is in this context that Perniola’s pioneering work on art carried out in the 1990s and his articulation of shadows and transit becomes incredibly useful and relevant.

Before the dance. Current materials and future projects of a reflection on Michele Di Stefano

Contemporary art, which explodes from the borders and identifiable genres, the dance requires to be discussed in a perspective that exceeds the narrow of the sector. It is a microcosm of the world, a privileged space for observing the displacements and tensions of the contemporary world whose stake is a new posture that redesigns the body map in the society of capital and in the era of relations mediated by the mechanisms of the network.
The result is a unique field of analysis to explore with the work of Michele Di Stefano, one of the most interesting figures in the advanced front of contemporary choreography. Space, time and aesthetic categories mark this path of reflection.