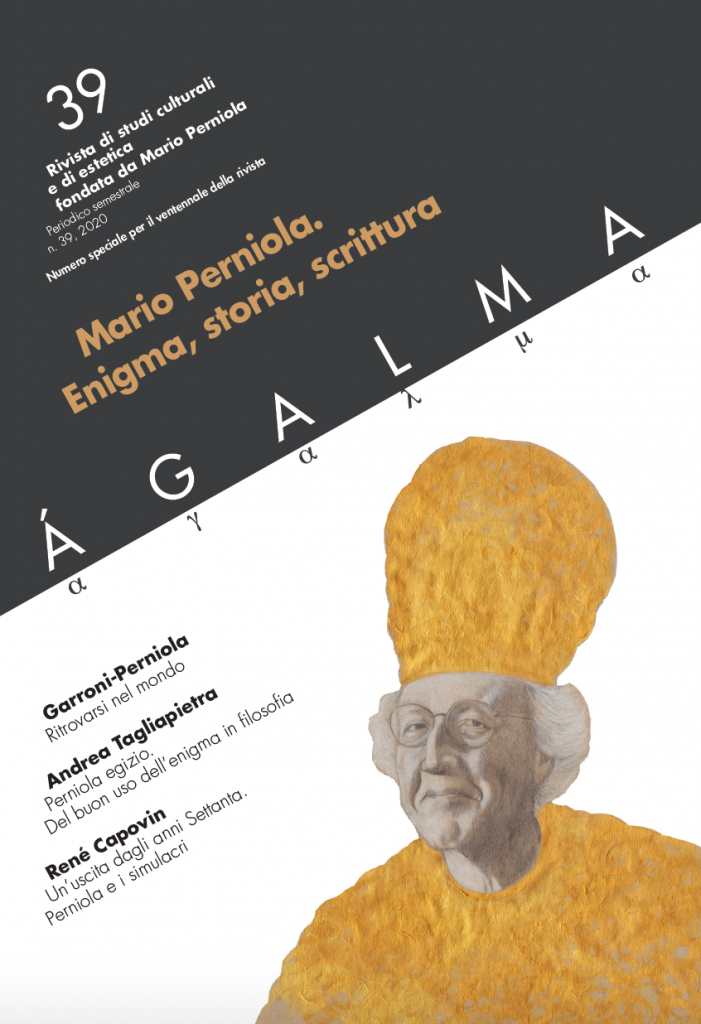 Perniola, an Egyptian. The good use of the enigma in philosophy

This article explores the structural role of the reflection on the aesthetics of Ancient Egypt, as well as of Egypt-related metaphors and similes, within the work of Mario Perniola. The author argues that Perniola’s conception of Egypt stands as an open alternative to the traditional Platonic, Christian and Hegelian way of dealing with it as a kind of pre-history of Western civilization. On the contrary, Egyptian art is considered by Perniola as the starting point of a permanent current within Western aesthetics, therefore as an aspect of the aesthetics of contemporary art itself and society (Egyptian moment). The article thus analyses Perniola’s characterization of an array of contemporary aesthetic phenomena (the neo-ancient, the sex appeal of the inorganic, etc.) through the lenses of their “Egyptian” dimension and philosophical meaning of the enigma.

An exit from the Seventies. Perniola and simulacra

In the Seventies “simulacrum” was a common term in the French intellectual debate, thanks to the reading of Nietzsche proposed by Pierre Klossowski and Gilles Deleuze, and later for its provocative use in Jean Baudrillard’s work. Perniola’s The society of simulacra (1980) reframes these influent models in a sort of manifesto, aimed to outline an exit from the Seventies. Not really viable as social or political option, the enigmatic strategy depicted in this book will be enacted from Perniola himself, opening a new phase of his thought.

The text aims to provide an interpretation of Mario Perniola’s book Il Sex appeal dell’inorganico. The analysis reveals a contrast between the subject, heir to the humanistic tradition, and the new representative of the inorganic sex appeal, which is characterized by a new sensitivity and a new conception of experience. The latter measures the distance that separates it from the former in the exercise of conscious will.

In search of the collective intellectual. Mario Perniola and journals: from Tempo Presente to Agaragar

The search for collective paths for philosophy and culture has been a constant in Mario Perniola’s reflection. Over the course of more than fifty years in which he has founded and directed many cultural and philosophical-political magazines, while he has collaborated intensely with others. The aim of this paper is to deepen his connection with magazines of his youth period, from 1961 to 1972, from Tempo Presente to Agaragar, passing through the experience of Situationist International and Ludd. These journals will be the breeding ground of Perniola’s entire philosophical, political and aesthetic reflection.

The richness of M. Perniola’s work, in addition to its innovative quality, lies in its trans-disciplinarity and in its multiple repercussion on different fields and areas of knowledge. In the context of the studies of digital networks and connective architectures, some categories proposed by his thoughts are particularly useful for the description of the transorganic ecologies and the new forms of feeling in the digital networks and the quality of the cultures of the digital natives. The following article presents an interpretation of five concepts present in Perniola’s work used in the study and analysis of digital networks.

The objective of this paper is to explore Mario Perniola’s perspective on art between the years 1966 and 1972. During this six-year period Perniola elaborates – mainly influenced by his closeness to revolutionary and protest movements such as the Situationist International and Ludd – a political and militant theory based on the dialectic overcoming of art. The year 1972, with the last issue of the journal Agar-Agar, marks the beginning of a theoretical rearrangement regarding art theory for the Italian philosopher. Whereas several scholars have recently focused on the later phase of Perniola’s thought on art, this paper wishes to draw the attention on a less investigated area of his researches. Specifically, I will develop his claims on the identity of art and revolution and his idea of an “artistic alienation” which originated in Western society.

The aim of the paper is to investigate the text of Maurice Merleau-Ponty’s conference The Film and the New Psychology, in order to deepen his choice of the seventh art as a paradigm for an idea of phenomenology based on the principle that every consciousness is, to a certain degree, perceptual consciousness. This paper aims to show how the reflection of the French philosopher gives cinema the status of a paradigm of the Gestalt phenomenon, highlighting its ability to restore visibility to expression and perception, through the – technical and artistic – reconstruction of the structure of behavior in its exteriority.

In the mood for. Dimensions of Stimmung

The paper aims to take into account some phenomenological analyses on the phenomenon of Stimmung, which enjoyed considerable fortune in 20th century aesthetic and philosophical studies in general due to the fact that it goes beyond the limits of subjectivity. Some contemporary studies even point out its “objective” nature. By considering the analyses of Husserl, Heidegger, Waldenfels, however, it will be highlighted that mood is characterized by the dimensions of horizon, disclosure, pathos, thus showing an origin irreducible to the subject-object distinction.

The sense of the senses: the aesthesiological project of Helmuth Plessner

The article offers a brief presentation of the aesthesiological theory developed by Helmuth Plessner, one of the fathers of German philosophical anthropology of the twentieth century. It is an ambitious project that seeks to link the Kantian systematic approach with a hermeneutical phenomenology of the senses. Alongside an illustration of the key concepts, we highlight the points of greatest interest for the aesthetic discourse, in particular the comparison between sound and image, the topic of schematism and the intrinsic connection between culture and embodiment. They are precisely the points that make aesthetics an essential component of the anthropology of eccentricity proposed by the philosopher.

Ontology of illusion and the genesis of meaning

This essay aims to tackle the meaning of the concept of illusions in relation to the terms “appearance” and “deception of the senses”. We intend to examine some cases of illusion to show how the idea of “a sensorial deception” is already a judgment about an experience: indeed, the senses themselves do not deceive. Deception implies an epistemological position on reality. The same can be said of the relationship between appearance and reality: the appearance of illusions, as compared to reality, is an epistemological question rather than an ontological one. Illusions are part of reality and hence they convey a sense of it.